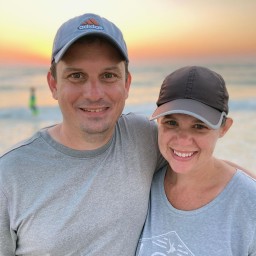 We’re currently on our way home from the best vacation ever. Matthew had a such a good time. Just before we left, he asked if we could stay another week, and I was asking myself the same thing. It started Saturday morning when we set out for Birmingham, AL to see VeggieTales Live where big Bob and Larry were celebrating their birthday. After spending the night in Montgromery, we drove the rest of the way to Cape San Blas for a week at the beach. Not only did he have Mommy, Daddy, Nana, and Papa to play with him, another family staying at Seacliffs had a 2 year old named Eli and the two of them had a great time playing together. We made several sand castles, a sand turtle, and a sand crab. He wasn’t very interested in getting in the ocean until the last day when we coerced him into jumping the waves with Daddy, which he loved. In the evening, we played UNO, and Matthew would “help" one of us. He learned (very quickly) how to play, but the funny part was when he announced what was in our hand. “A green 2 and a red 3 makes twenty-three!"

We saw more marine life this trip than I’ve ever seen. There were so many dolphins in the ocean right in front of the beach house. We’d see anywhere between 3 to 10 in a pod, and several times one would jump out of the water. We saw several sharks. One was a hammerhead, about 3 feet long. We also saw a stingray, lots of fish, and turtles (in the pond). However, the highlight for me was hunting and catching blue crabs with a net. A guy just down the beach showed us he’d caught several, so Eli’s dad, Matt and I set out to catch our own. The ocean was clear enough that you could spot them on the ocean floor, just off the shore. They didn’t like being chased, and they’d put up a fight! On several occasions, I could be seen doing what Amber coined as the “crab dance."

Our vacation couldn’t have ended on a better note. I felt Katelyn move for the first time the morning we left for home. I like to think that she had a great time, too. 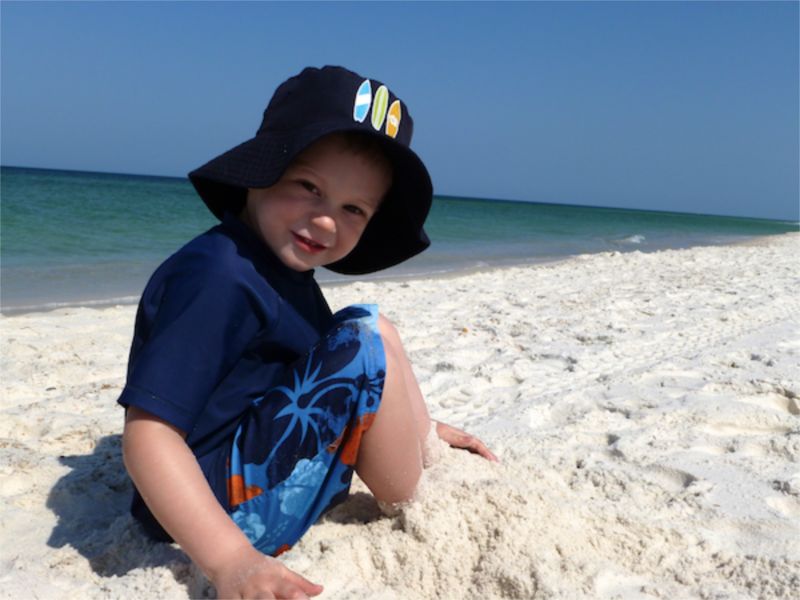 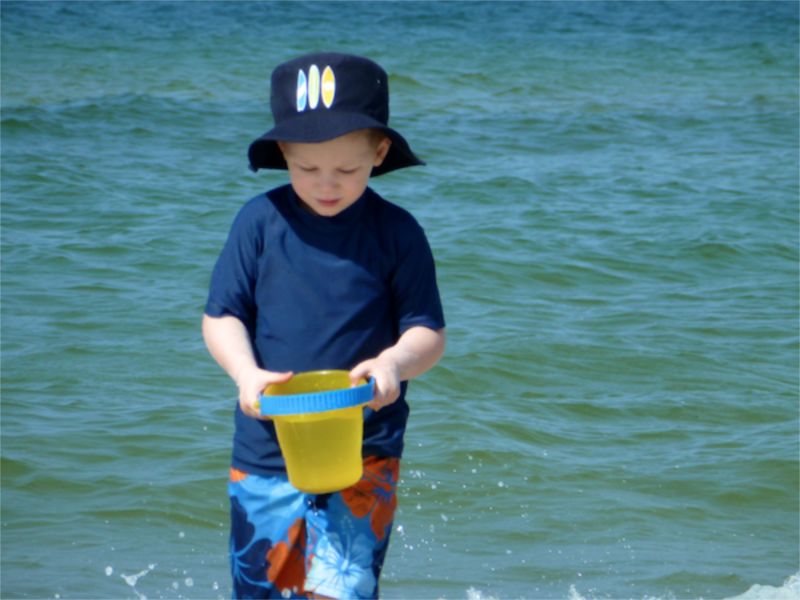 He made about 200 trips back and forth, carrying water in his bucket and dumping it onto his sand castle, or a hole. 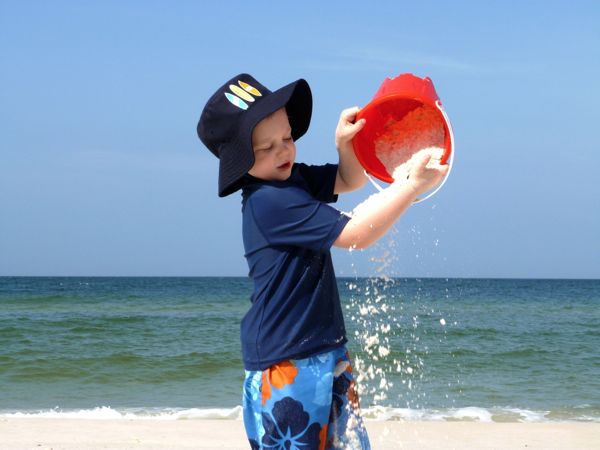 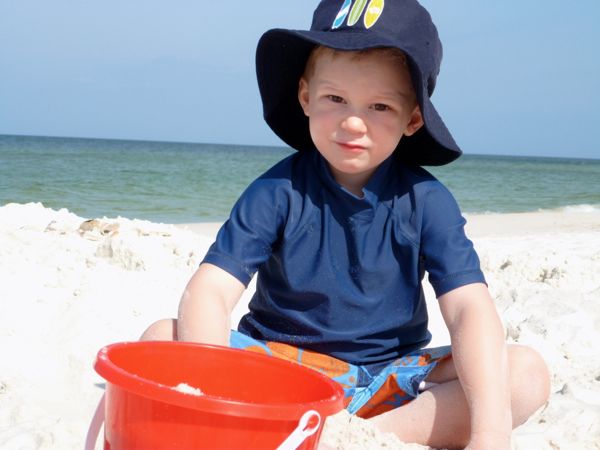 Every day, he’d sing and dance on top of this sand dune 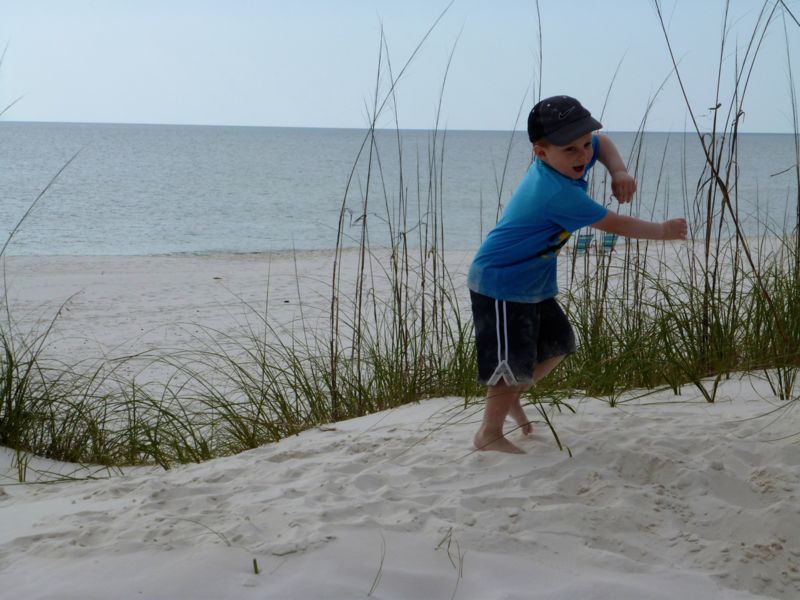 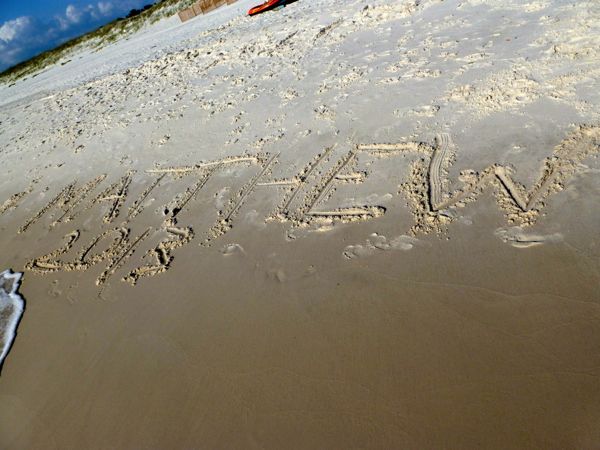 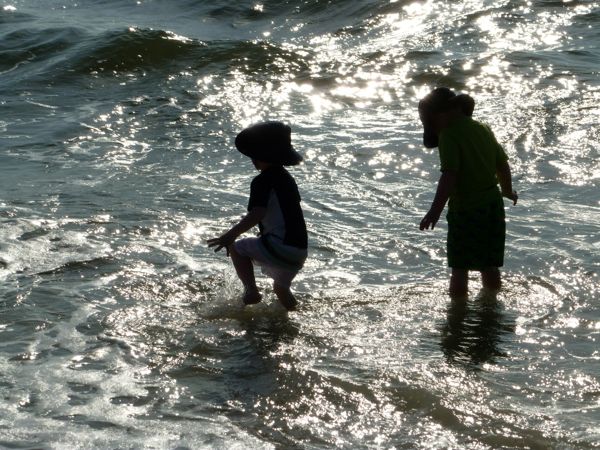 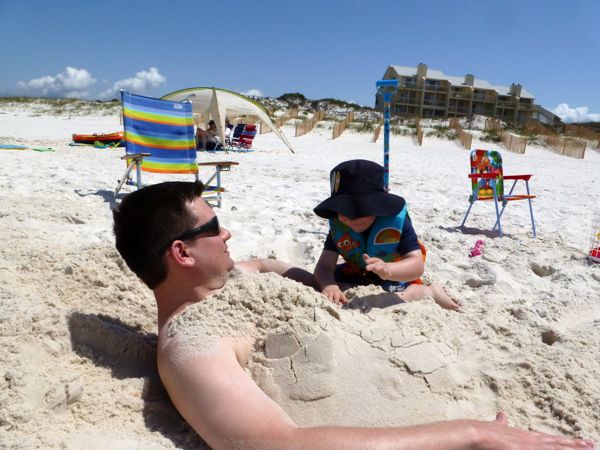 Matthew’s lined his trains on top of the “mountain." 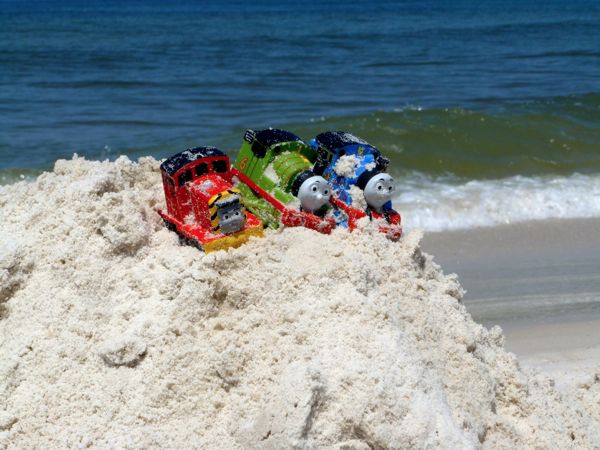 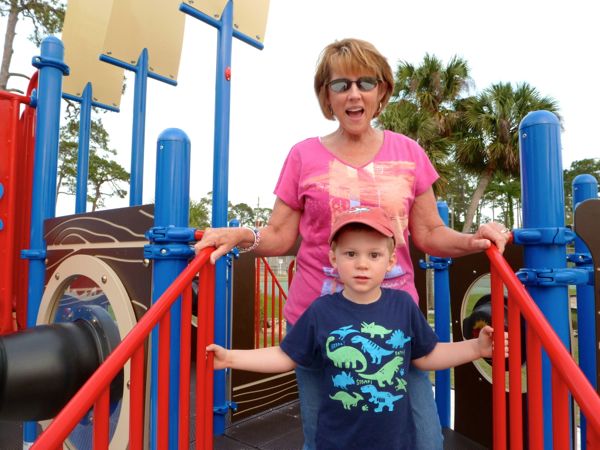 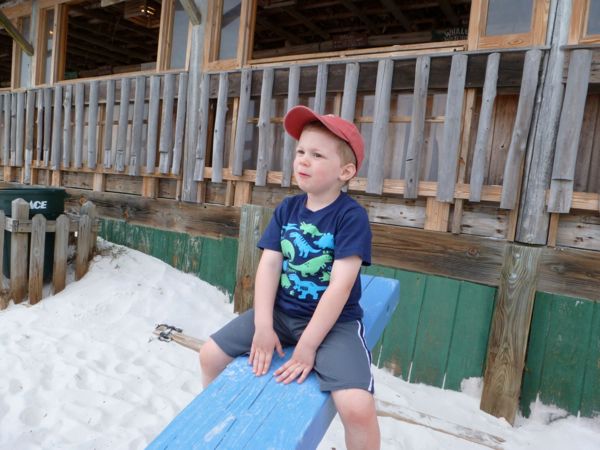 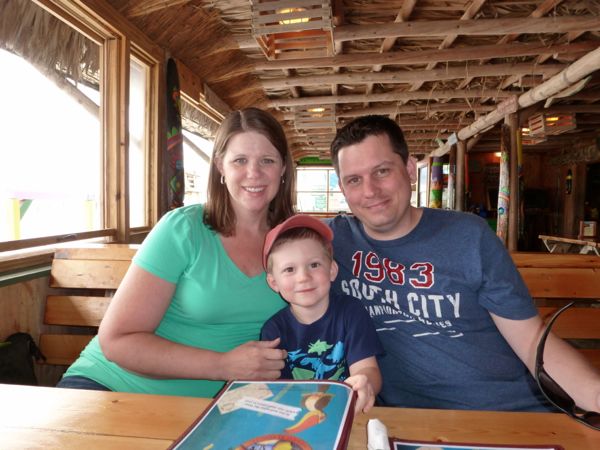 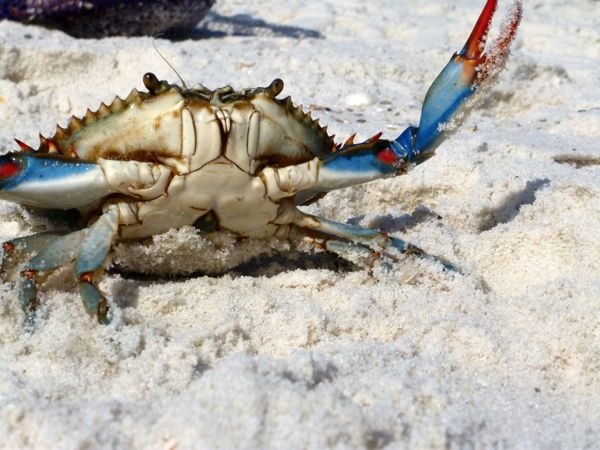 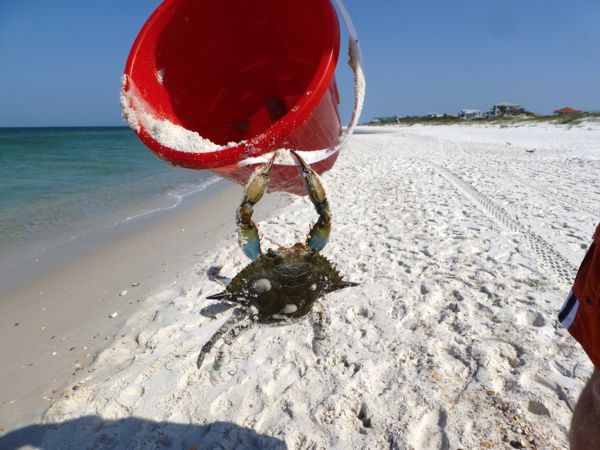 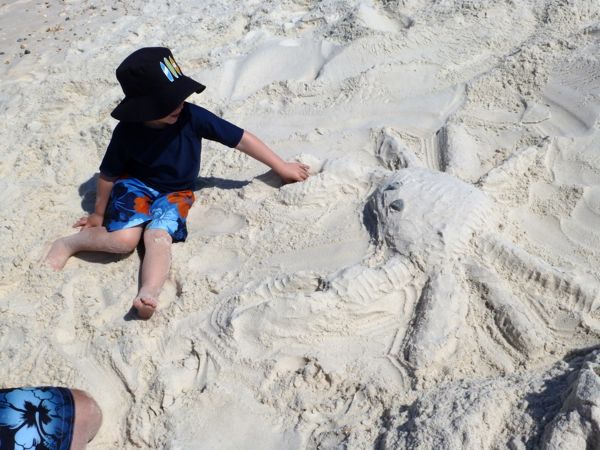 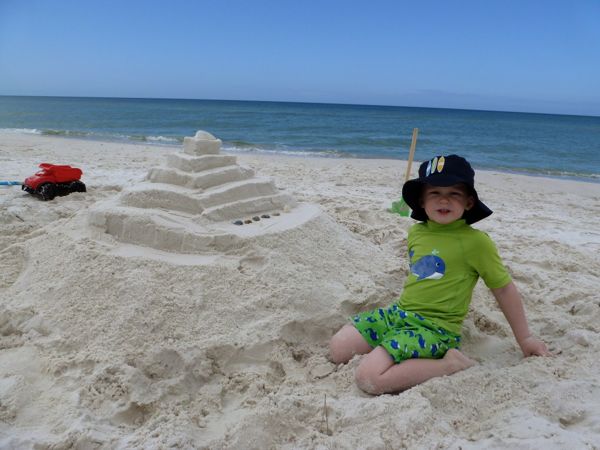 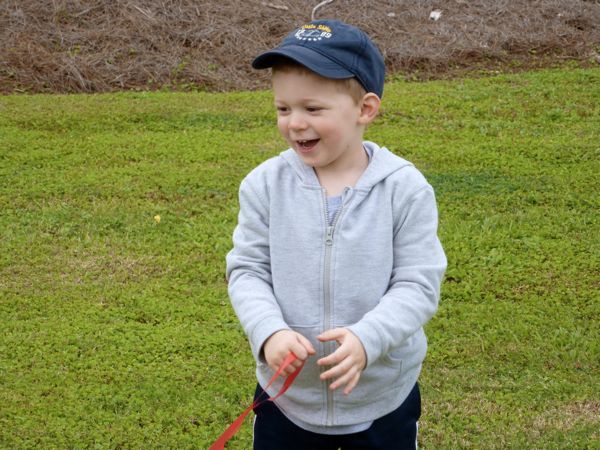 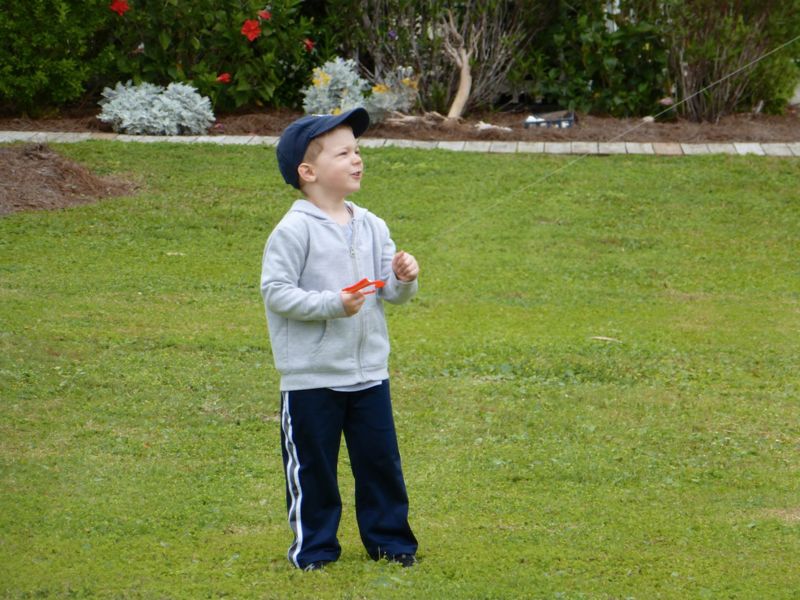 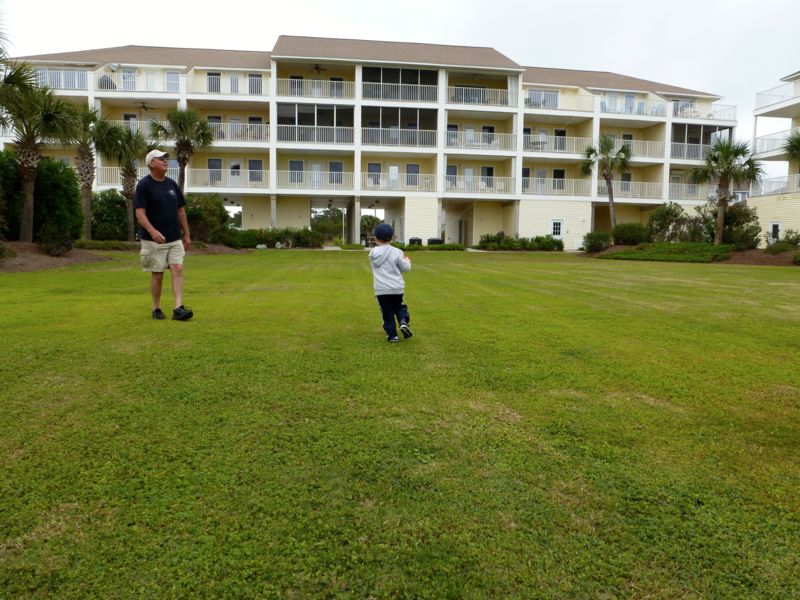 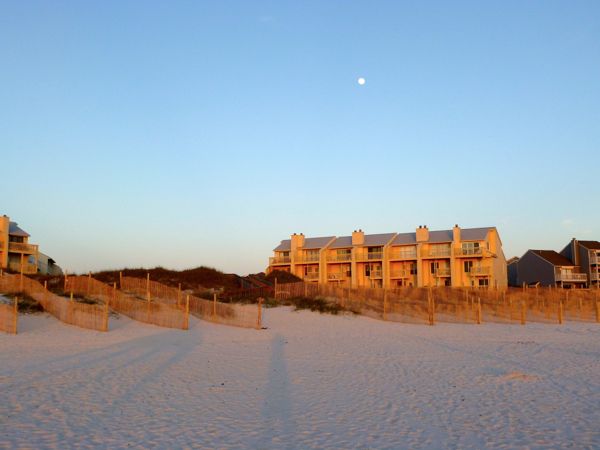 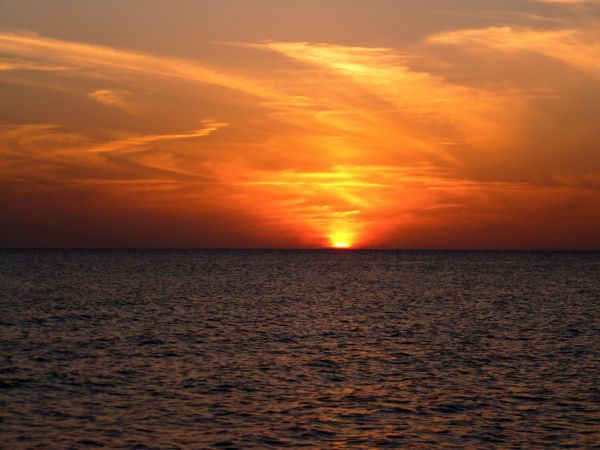